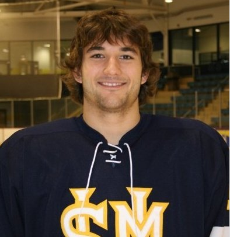 Junior forward Zach Joy (Dover, N.H.) of the University of Southern Maine men’s ice hockey team has been recognized by the ECAC (Eastern College Athletic Conference) Men’s East league for his outstanding play during the week of January 11-17. It was announced Monday afternoon by the ECAC office that Joy had been selected as the Player of the Week. This is Joy’s second Player of the Week award this season. He previously was picked as the Player of the Week the opening week (November 16- 22) of the season. In three games last week, Joy scored five goals to help the Huskies go 2-0-1. He had two goals in the Huskies’ 5-2, non-conference win over Suffolk University, tallies two goals, including the game winner, in a 4-3 win over in- state rival Bowdoin College, and scored the game-tying goal with less than five minutes to play in a 1-1, overtime tie with Colby College. Joy leads the Huskies in scoring with 17 goals and two assists for 19 points. According to the latest national statistics on collegehockeystats.net, Joy is tied for the Division III national lead in goals per game (1.13).