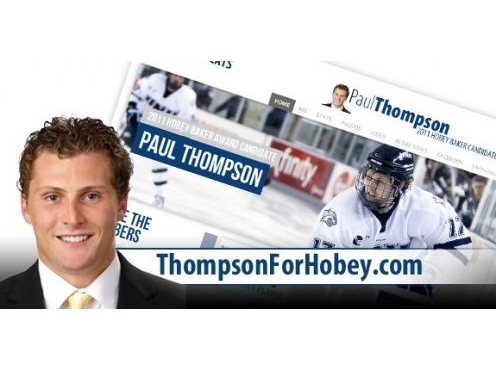 Thompson becomes the second Wildcat in as many years and third in the last four seasons to be named to the top 10. Last year, Bobby Butler (Junior Bruins) became UNH’s second Hobey Baker Hat Trick (final three) finalist, while in 2007-08 Kevin Regan was a top-10 finalist.

Thompson, Hockey East’s scoring champion, is enjoying not only his best season as a Wildcat, but arguably the greatest season by any Wildcat forward in recent history.

Thompson ranks first in the nation in power play goals with 12, ranks third nationally in goals (28) and fourth in scoring (1.44 ppg). In addition, he is second nationally in game-winning goals (11) and his 52 points are fifth best. Thompson has 17 multi-point efforts, seven multi-goal games and has goals in 20-of-36 games.

The senior forward has been even better among Hockey East’s elite, ranking first overall in goals (28), points (52), power play goals (12) and game-winners (seven). In conference play, Thompson finished first in points (42), power-play points (18), power-play goals (nine) and was second in Hockey East play in goals (23) and goals per game (0.85).

Thompson has already taken home his share of hardware this season, highlighted by his Hockey East Player of the Month honors in November and January. Thompson was also a three-time Hockey East Player of the Week this season. He is a semifinalist for the Walter Brown Award, given annually to the best American-born college hockey player in New England. On Wednesday, Thompson collected more hardware from Hockey East as he earned the Hockey East Humboldt Storage and Moving Scoring Championship as well as the Army ROTC Three Stars Award for the 2010-11 season.

Thompson is also a standout in the classroom. He will graduate in May with a degree in Health Management and Policy with a 3.10 grade point average. He is a two-time Hockey East All-Academic Team member.

Thompson’s impressive senior campaign is a fitting end to his outstanding career. Thompson became the 69th player in program history to register 100 career points doing so in extremely balanced fashion with 57 goals and 55 assists for 112 points thus far in his collegiate career. Thompson’s 112 points is tied with David Aiken for 59th on the all-time scoring list at New Hampshire.

Phase two of fan balloting will begin March 18 from the list of Top Ten Hobey Baker finalists. The fans’ vote accounts for a full 1 percent of the total ballot in each phase in selecting this year’s award recipient.

The 2011 Hobey Baker Award winner will be announced from a field of three Hobey Hat Trick finalists Friday, April 8, 2011 during the NCAA Frozen Four Championships in St. Paul, Minn. The 31st annual award announcement honoring college hockey’s top player will be televised live during prime time on ESPNU at 7 p.m. ET. For more info on the Hobey Baker Award or to access the Hobey logo, please visit hobeybakeraward.com.

Thompson and New Hampshire will play fourth-seeded Merrimack College in the Hockey East semifinals Friday, March 18 (8 p.m.) at TD Garden in Boston. The game will be broadcast live on NESN with radio coverage on the Wildcat Sports Radio Network.

– Courtesy of University of New Hampshire