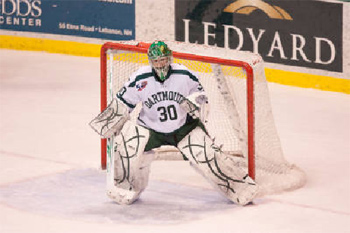 James Mello, Dartmouth College – (Junior, Goaltender – Rehoboth, MA) 2 GP, 50 Saves, 1.00 GAA, .962 SPct., 2-0-0; Mello helped the Big Green capture its second weekend sweep of the season with wins over Quinnipiac and Princeton. On Friday, Mello had a shutout going until late in the third period. The next night against Princeton he allowed the Tigers a goal in the waning seconds on the opening frame and then held them off the scoresheet the rest of the way, despite 12 shots by Princeton in the third period. Mello has taken back the top spot as the ECAC Hockey’s top goaltender. He is now 13-4-3 on the season and has a 2.00 GAA and a .936 save percentage. Other nominees: Mike Clemente, Brown, Andy Iles, Cornell & Keith Kinkaid, Union