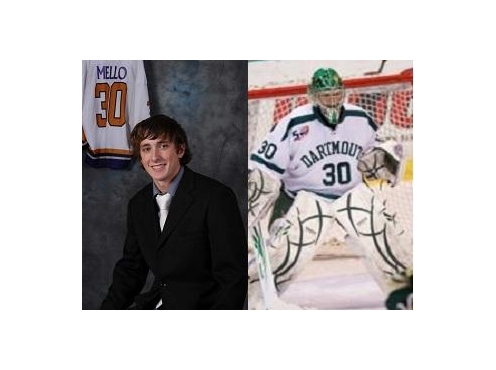 Albany,NY – ECAC Hockey announced the finalists for the 2010-11 Men’s Player of the Year Award, and among the three players under consideration is Dartmouth College goaltender James Mello.

Prior to the 2010-11 season Dartmouth netminder James Mello had only played in 17 career games, but has made his mark on the league appearing in 28 of Dartmouth’s 32 games this season, including starting the last 19 games for the Big Green for a career-high. He earned his first-career shutout on Nov. 6 against Union and his first shutout victory against Brown on Feb. 4. The junior logged 1246:14 minutes between the pipes, only surrendering 40 goals for a 1.93 goals-against average, which ranked second in conference play. Mello made 603 saves on the season in conference action for a .938 save percentage, tops in the league among his counterparts. Mello is also a finalist for this season’s Ken Dryden Award, honoring the league’s top goaltender, and was recently named to the All-ECAC Second team.

Mello played two seasons for the New Hampshire Jr. Monarchs, beginning with the 2006-07 season which saw the Monarchs win the EJHL Dineen Cup Championship. He posted a 2.55 goals against average and a .921 save percentage and was named Playoff MVP after earning two straight shutout victories in the final round. In the 2007-08 season, Mello finished with a 2.14 goals against average and a league-leading .932 save percentage, which earned him Goaltender of the Year honors.