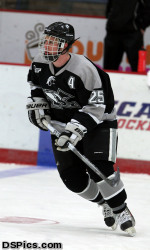 The Providence College Area Alumni Club will hold its Mal Brown Awards ceremony on Sunday, March 6. Senior Matt Germain (Rockland, Mass.), a member of the Friar ice hockey team, will receive the Joseph V. Macandrew Award, while senior Julie Ruggieri (Barrington, R.I.), a player on the PC field hockey team, will receive the Helen Bert Award. The awards are presented to two outstanding student-athletes who have shown leadership and scholarship.

Germain, who was named an assistant captain this season, has played in 132 career games, including all 34 this season. He has 17 goals and 37 assists for 54 career points, including a career-high nine goals this season. His nine goals ranks second on the team, while his 18 points ranks third. He has been named to the Hockey East All-Academic Team for three consecutive seasons and has an impressive 3.69 cumulative grade point average at Providence.

Ruggieri started all 18 games for the Friars in 2010 and tallied eight points on three goals and two assists. Ruggieri earned All-BIG EAST First-Team honors and was selected to play in the NFHCA Division I Senior Game. In addition, she was selected to the Longstreth/NFHCA Division I All-Region First Team. Ruggieri has been named to the NFHCA Division I National Academic Team for four consecutive seasons and the BIG EAST Academic All-Star Team for three straight years. She finished her career ranked 14th all-time in career scoring (67 points), 11th in career goals (28) and 27th all-time in assists (11).