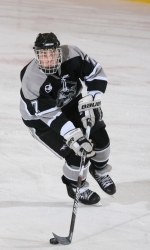 Baier played in 127 career games at Providence, including all 34 contests this past season. He led all Friar defensemen with five goals, seven assists and 12 points. In his final game as a Friar, Baier scored a career-high two goals and added one assist to lead the Friars to a 5-3 win over seventh-ranked Merrimack on March 5. In 2009-10, he recorded two goals and five assists for seven points and was named to the Hockey East All-Academic Team.