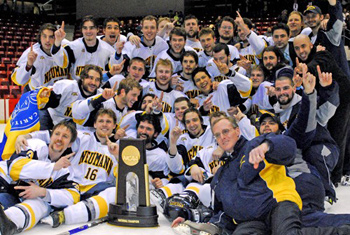 In only his first season at the helm, Neumann’s championship makes Knights’ head coach Dominick Dawes only the second person to ever win a Division III title as both a player and a head coach. It was only six years ago he won it as a player as he was a junior at Norwich when the Cadets won the 2003 national championship.

The only person to previously have accomplished this feat is current St. Norbert head coach Tim Coghlin. Coghlin was a senior defenseman and captained University of Wisconsin-Stevens Point to its first national title in 1989, and scored the title as coach with St. Norbert just last year.

“It’s a great accomplishment and it feels good,” he said of the unique claim to fame.

“But I have to thank [Neumann] for giving me the opportunity to lead these guys. I also have to thank [Norwich head coach Mike] McShane for dragging me to Norwich and having those teams he had back there.”

When it comes to winning his title in his first season, Dawes was quick to pass the credit down to those who came before him and built the Knights into a national power in less than a decade.

“This is tremendous and it’s obviously a great accomplishment,” explained Dawes. “But I was pretty fortunate to step into this group. No other [coach] has been fortunate enough to step into a group like this that had this much ability.”

“These guys had the ability when I got here. It was just a matter of coming together and doing it,” he added.

With a national championship in his pocket less than eight months into his head coaching career, Dawes has certainly set the bar high for himself and the Neumann program. Keeping the bar at the lofty heights it now sits at will be the next challenge for Dawes—especially considering the Knights will lose 14 players to graduation this spring.

“From here it’s going to be finding guys to replace this group,” he said regarding the near future. “It’s going to take some work because there are some pretty good players in this group, but we have to go find some players, replace these guys, and get back here.

“These seniors are the guys who made us one of the best teams in the nation over the past couple seasons.”

For now, at least, the “one of the” can be dropped from his comment as the Dawes’ led Knights will forever be in the books as the best team of the 2009 season.