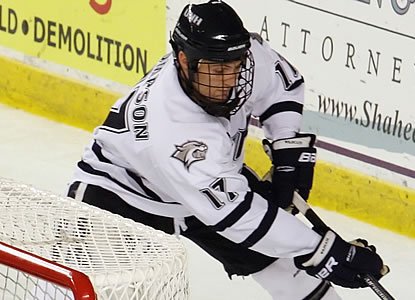 DURHAM, N.H. – Paul Thompson (Derry, N.H.) scored two goals, the first of which was the 50th of his career and 100th career point, to lead the sixth-ranked University of New Hampshire men’s hockey team to Friday night’s 6-3 Hockey East victory against 15th-ranked University of Maine at the Whittemore Center.

Thompson entered the game with 99 career points and became the 69th UNH skater to reach the 100-point milestone when he gave the ‘Cats a 1-0 lead at 4:31 of the first period. He was one of four Wildcats with a multiple-point game as linemates Phil DeSimone (East Amherst, N.Y.) and Mike Sislo (Superior, Wis.), as well as defenseman Blake Kessel (Verona, Wis.) finished with three assists apiece. The three assists – and points – equaled personal bests for DeSimone, who now has 98 career points.

The teams combined for six first-period goals, including three power-play tallies, as UNH took a 4-2 lead into the first intermission. The Wildcats struck first at 4:31 when Thompson’s one-timer from the slot beat Ouellette. Sislo, who won the battle for the puck in the right corner, and DeSimone, with the centering pass from behind the net, set up the tally.

UM went on the power play 50 seconds later, however, and Nyquist scored on a backdoor pass from Tanner House at 6:39 to tie the score, 1-1. Brian Flynn initiated the scoring sequence when he tapped the puck back to the left point, where House sent a diagonal pass low to Nyquist at the right post.

New Hampshire regained the lead, 2-1, at 8:04. Matt Campanale (Chester Springs, Pa.) moved the puck from the left point to John Henrion (Holden, Mass.) in the circle. Henrion’s shot sailed wide of the cage, but Austin Block (Thousand Oaks, Calif.) corralled the rebound in the slot and wristed a shot into the net.

The Black Bears went back on the power play 35 seconds later and Nyquist struck again at the right doorstep to tie the score, 2-2, at 8:53. From the left point, Will O’Neill (two assists) was denied by DiGirolamo but Robby Dee (two assists) tapped the loose puck from the top of the crease to Nyquist.

UNH regained the lead for good, 3-2, at 11:39 on a Dalton Speelman (San Jose, Calif.) power-play goal. Sislo swung the puck from the top of the left circle to Kessel in the high slot. Kessel’s shot was blocked by a UM skater, but Speelman gathered the puck in the slot and backhanded a shot past Ouellette.

The Wildcats extended the advantage to 4-2 at 16:04 on a one-timer by Kevin Goumas (Lake Worth, Fla.). Kessel’s head-man pass from the defensive blue line connected with Stevie Moses (Leominster, Mass.) on the left wing. Moses continued into the left circle before finding Goumas cutting down the slot for his first collegiate goal.

Maine pulled within 4-3 at 18:09 of the second stanza. From the high slot, O’Neill moved the puck to the right circle and Nyquist snapped a shot on goal that eluded Di Girolamo. Dee was also credited with an assist. Early in the third, Di Girolamo preserved the one-goal advantage by denying Matt Mangene from point-blank range after he slipped behind the defense.

New Hampshire reestablished a two-goal lead, 5-3, with a 4-on-3 power-play goal at 7:06. DeSimone initiated the scoring sequence with a diagonal pass from the top of the right circle to Kessel at the left post. Kessel slid a pass across the crease and Thompson tapped the puck into the open right side.

Less than a minute later, Nyquist generated a breakaway but he was stoned in the low slot by Di Girolamo.

UNH closed the scoring at 14:56 when Sislo, at the left point, found Mike Beck (Long Beach, Calif.) with a late rush down the slot and he wristed a shot inside the right post for his first goal of the season. DeSimone, who carried the puck across the blue line and left a drop pass for Sislo, was also credited with an assist.

New Hampshire and Maine complete the “White Out the Whitt” weekend Feb. 5. The game, which will be televised live on NESN, begins at 7 p.m.